Mr Popper’s Penguins. That’s what we were watching when she got the phone call. Jim Carey was just going to save his bevy of adorable penguins from the evil zoo, when she got a call from the clinic.

“I’ll be there in fifteen minutes”, she said.

“I have to go to the clinic for a check-up,” she explained, when she hung up. “My period hasn’t been regular.”

“Oh okay, don’t worry, that’s normal,” I said, grabbing a biscuit off the assortment on the table. I’d had loads of friends with irregular periods – hormonal imbalance or something.

“No, you don’t get it,” she replied, “I’ll tell you when we leave.” She was putting on her shoes. Her father, a retired boxing champ, passed us by on his way to the kitchen. “Aren’t you going to tell him about the check-up?” I asked. She shook her head, no.
She left the room to get her bag.

If she was any other girl I’d think she was pregnant. But Mallu? Nah, she was a sweetheart, just a kid – she couldn’t have had sex yet. Hell, I hadn’t had sex yet and I was older than her.

“Bayar and I had sex,” she told me as we walked out the gate.

“And you didn’t use anything?” I asked, without missing a beat.

“Well, that was really stupid.”

Summer was beginning. A bead of sweat trickled down the back of my neck. I pulled my dupatta over my eyes.

“I know,” she finally responded. “I took a pill afterwards.”

“You’re supposed to take it before.”

“No, this is another pill, you take it after and…”

The questions came tumbling out of my mouth, less out of concern and more out of some voyeuristic curiosity.

Why didn’t you use a condom?

When did this happen?

Did you tell him about your check-up?

What did he say?

Are you feeling okay?

She calmly answered my questions.

She’d “taken a test on the device” and it was positive (she avoided using the word ‘pregnancy’), she’d taken some pills afterwards prescribed by the doc at the clinic, and they were now calling her for an ultrasound.

She was frighteningly calm; it unnerved me.

I wanted to grab her shoulders and shake her.

“What are you going to do if it turns out you are having a baby?”

“You should be scared. This is some serious shit.”

The government-sponsored hospital smelled like piss and damp clothes. Room 25. Mosquitoes buzzed over the seats in the waiting area. A tall machine with blinking gaudy neon lights stood next to the seats like some circus contraption. Check your weight for Rs.2! the label on it said.

I’d met Bayar. He was that typical smug twenty-something man-child. Interests: cars and boobs. He was an idiot but Mallu was young too, so I didn’t complain about it. It’s not like she was going to marry him or anything.

Above it was a sign. Ultrasound – Rs. 50. The cost of checking if Mallu’s days as a carefree undergrad were over.

We waited around for half an hour, swatting the mosquitoes. A dog ran through the corridors meanwhile. A moaning girl rolled by in a wheeled bed. A skinny man holding a plastic bag spat on the floor.

“How did he respond exactly?” I asked her, shifting in my plastic chair.

“He wasn’t as serious or worried about it as I was… Told me to take the pills the doc gave me, said everything would be okay, his friend’s girlfriend went through the same thing, said if the meds didn’t work and I – you know – he’d marry me.”

“He said he wished he could be with me now.”

“Jobless guy can’t come see you when you might be carrying his baby… we’re in an episode of One Tree Hill, everybody!”

She gave me an apologetic look that broke my heart. I shut up.

I’d met Bayar. He was that typical smug twenty-something man-child. Interests: cars and boobs. He was an idiot but Mallu was young too, so I didn’t complain about it. It’s not like she was going to marry him or anything.

Of course not, she was going to have his baby instead.

This was all still my motherly outrage spilling out hasty assumptions inside my head; we hadn’t even taken the ultrasound yet. I smacked a mosquito between my palms – SPLAT – imagining it to be Bayar’s empty little skull.

After a lot of pointless waiting I finally spoke to the sleepy guard at the counter in a scary authoritative voice that seemed to snap him out of his stupor, “Where’s the doctor? This is an emergency!”

He pointed us to another corridor.

We found the doc playing Temple Run on his iPhone, legs propped up on a chair.
Apparently he’d been waiting to be beckoned, before actually attending to his patients.

We followed him back to Room 25. We waited in an inner room while he attended to another patient first. Mallu pointed at the ceiling.

There, stacked above stained off-white cabinets, in the ultrasound section of a dirty neglected clinic, were piles over piles of dusty, yellowed books, tied up in bundles, at angles, like some textured avant-garde decoration in pale brown, so inappropriate in this room. You could smell them, the smell of old books. They looked centuries old, artefacts, journals perhaps of surgeons from some forgotten era that spoke of first discoveries and conundrums explored in ink. You find beauty in the most unexpected places, I thought. And then mentally reprimanded myself for my perverse diversion from my friend’s very serious predicament.

“Darwaza band karo,” said the doc when we were inside. Shut the door.

The room was dark, illuminated by only the eerie white-blue of the ultrasound screen and x-rays of someone’s brain on the wall.

She wasn’t pregnant. The meds had worked; she’d bled out whatever little of the foetus that had developed. Her uterus was a little thick but that was normal. We got some advice about protection and a biology lesson about fallopian tubes and hormones before leaving.

“What a relief!” I exclaimed, as we walked out the gate. Mallu’s face was calm, inexpressive, exhausted. “I want to know what you think,” she told me. We climbed into a shared auto.

“I think you already know how fucking stupid both of you were for doing what you did. I think he shouldn’t have coaxed you into having sex when you said you weren’t ready. I think he should have been the one with you at the ultrasound today. I think he’s bad for you.”

She looked at me with a wry smile.

“But you’re stronger than you give yourself credit for, you’ll get over this,” I told her when we got home. “Take your time to figure out what this means for you… Whatever you decide, just be strong, and respect yourself.”

“I have to be strong and respect myself,” she repeated, mechanically, like she’d heard those words for the first time. She nodded absently to herself.

“I have a test tomorrow, I’m going to study,” she said. She peeled a banana and told her dad they were out of washing powder.

I walked home alone, at 9.20 PM, cars and lights whizzing past me in the chilly Delhi night. Three weeks ago, something that was beginning to turn into a small person, died, and nobody in the whole world cared.

Shifani Reffai is a twenty-two-year-old Sri Lankan undergraduate in Delhi University, studying the love of her life: literature. Before university, she worked as a writer, subeditor and photographer for several Sri Lankan newspapers and magazines (including The Daily Mirror, The Sunday Leader, Chokolaate, Leisure Times, Ink and Finesse). Since, she has done a little bit of this and a little bit of that – architecture, wedding photography, film production, and theatre – because she always has her fingers in a lot of pies due to a severe case of ADD (or so she hypothesizes). She is also an astronaut. But that’s a secret, sshhh. 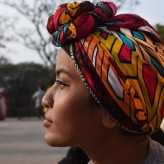 Re Write
A Century of Entertainment