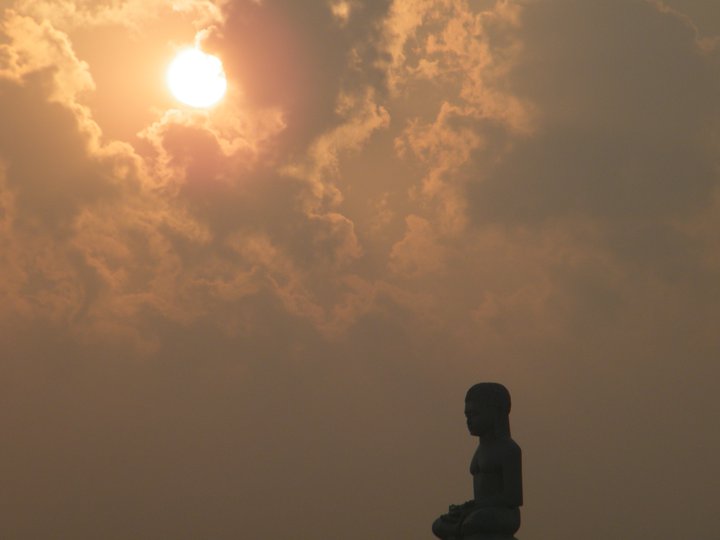 eFiction India8:51 amOctober 23rd, 2013
Kingdom of Heaven by Gazala Anver
You are reading the words of the Last Philosopher. I earned my philosophy in the strangest possible way. I wasn’t born like this, rest assured. Time has forced me to think. Rather, the lack of time has.

Back then, I was only a brilliant mind. I could convince people to do just about anything. Believe me when I say that. But I had no philosophy, I had no soul. Souls were a rare crop, and I didn’t grow up with one. Probably because a soul requires some watering, and, like everything else, there never really was much water to begin with. Lately however, I have watered my soul with tears. If only I had cried back then! Perhaps then I wouldn’t have thought of it. But is the pleasure, the pathetic keening of one man worth listening to, in the name of the greater good? I thought not, and theoretically, I still think not. Practically however….

I grew up to be part of the elite few who were given the job to sustain the illusion of sustainability. My conscience was having a siesta, or perhaps a quietus in itself.

Oh, how the word ‘quietus’ rings bells forlorn! What would I prefer? The quietus of this forlorn philosophy, or the pain I inflict upon myself by the simple act of thinking? Do I deserve this suffering, knowing that I took writing one’s destiny a step further, and wrote my own quietus, going as far as to specify, in explicit detail, the time, date and method?

But I digress. I lived in a brilliant self-constructed world where people of my calibre were very much the New Gods. People looked to me to solve their little problems, and I suppose, that’s where it began. It started off with my clients telling me, “Oh, I have a brilliant idea! Simply brilliant! But…” The list of ‘buts’ would be endless. I would listen, smoking my lean-mean cigar and furnish them with solutions my brand of nihilism had to offer.

“You don’t have to worry about that, let me assure you. The consumers will be none the wiser.” Who cared if a few more people died, eh? Humanity was too costly, and the human inflation continually inflating. That evening, I sold my very first ingenious idea and I celebrated it by peeling off the lace panties of a dashing brunette.

You see, something very strange had happened by then. You could call it the ebbing away of the last vestiges of truth. I prefer to replace ‘truth’ with ‘common sense.’ People chose, of their own free will, to blind themselves to what was happening around them. It wasn’t as if anyone was forcing them. Their blindness was entirely democratic. I was one of the first to realise it. Knowledge in the wrong, or for that matter, even the right hands, is dangerous.

And don’t tell me the wise never use their mental superiority to fashion the stupid sheep followers according to their own! Well, no matter. Your opinion didn’t, and still doesn’t, count.

Knowledge itself is dangerous. But this wasn’t simply knowledge. This was wisdom, because I knew exactly what to do with it. And I did. Can you hold me at fault for being the first to break the mental barrier of indolent stupidity? And don’t tell me the wise never use their mental superiority to fashion the stupid sheep followers according to their own! Well, no matter. Your opinion didn’t, and still doesn’t, count. Because it remains stupid. But you see, my wisdom led me to folly, or perhaps wisdom itself is folly, for clearly, it is a substance too detrimental for this world, as scarce as it is.

The acceleration of our race was sickening. Oh, people died, people like myself made sure of it, but never nearly enough. And yet life continued. My life changed, much like clothes rather than seasons, just like my bed partners did, daily. And I became caught up in exactly how brilliant my whole scheme was. All I really did was take advantage of what was already there, that is, of inherent, over-grown stupidity. You democratically chose to blind yourselves, and I helped draw down those blinds. At your discretion, needless to say.

My hunger continued to grow. One night, while I spread Magdalena’s legs like I spread my daily jam, she told me something before I could close her mouth with mine, something that spun my web of thought. She was a scientist, one of those few left, who, like me, controlled a different kind of truth. She told me, rather breezily, as I was exploring yet another paradigm of truth, that this might very well be our last burst of oxygen… because as it turned out, there was barely a few days’ supply left. Her coherence was soon reduced to a series of deep moans, but she had given me the answer to the universe.

And it was all a question of packaging.

Magdalena wasn’t entirely right, but she was getting there, and with her help, slowly, slowly, slowly, coming to a full explosion, the solution came. It began. I passed myself off as a Good Samaritan, a saviour of Earth, sacrificing myself for the greater good of mankind. And I told unto them, verily, thou shalt not be cruel to thy elders. I told them so, among other things like chastity and purity, convincing them that they really were capable of moral integrity. That was the Son in me speaking, and I eclipsed them with my well paved arguments.

Simultaneously, I began my second scheme. While I preached, and they believed, so desperate as they were for a touch of divinity, I introduced them to the idea of… Kingdom of Heaven. My own tourist destination, “a historical place, where peace and love blend. Nothing but the best for your loved ones!” And they believed me. In reality, oxygen was becoming vastly scarce and so I exhumed their “loved ones,” our beloved Elders, and then, using their flesh and marketing it as the world’s best fertiliser, I encouraged the people to rebuild their world. You see how flawless my plan was? Not only was I the new messiah, but I also had several side businesses to go with it. And I didn’t even have to lie. When the press asked me what the secret to the world’s best fertiliser I manufactured was, I told them it was humanity’s collective love. And let’s be fair here. The money I made from my Kingdom of Heaven went into buying plots of land and seeds: every tree I had only read about as a child, I planted them in all the different locations of the world, fed on by humanity’s voluntary sacrifice.

But I have to admit, there were a few flaws in my plan. I hadn’t counted on the fallacy of youth. One morning, I woke up next to Magdalena, realising I was getting old. Our children were fully grown and partners in my business. But while I planted many seeds for trees, I neglected to plant the seeds of conscience. And that’s when I became a Philosopher.

The world had progressed too far and too fast for it to simply stop in its tracks. And now I am truly old, clutching a ticket to the Kingdom of Heaven, in my favourite Bermuda shorts, holding on to Magdalena’s hand breathlessly. She had Alzheimer’s, and she had no idea where she was going. And I… I realised that it was necessary to sacrifice myself for the human race to continue. And so, I, the Last Philosopher, am writing my last, soon to be crucified by my own idea.

Editor’s note: Herein, we have included the original draft of our predecessors manuscript. We have, however, decided to work on an extended version. Await The Bible, available soon in the bookshop nearest to you!

Gazala is someone who lives at the edge of the shadow, or is it penumbra? Someone who writes, paints and draws, photographs and occasionally remembers she’s a journalist… when it suits her. You may also hear her sing or act. And once in a while, when it suits her, she puts on a human face and lives a little. Just a little.

The Star by Shruthi Rao
Over the Edge by Nikhil Sharda