Little-Brother’s tummy rumbled so loud, it woke me up and I could not return to my dreams. My mind started to roam. Things in life happen for a reason – I was thinking, people often say this. No one ever asked me what I think for I too have some wisdom to impart.

As a matter of fact, I have a lot to say about many things.

For instance, the heat was oppressive some days back. Our throats were scratchy all the time. Tongues curled up in our dry little mouths and Little-Brother kept emitting shrill cries deep into the night. Others in the neighborhood were crying too. The night air was filled with many such cries, still each time Little-Brother cried Mama would pull him underneath her.

“Hush,” she would chirp. “They’ll hear you.” She would nose him gently while he suckled her dry teat.

Then it got sultry. Like this morning was sultry. We learned quickly to grab the dew to quench our thirst. Sweet fragrances swamped the air this morning. Huddled in our nest under a canopy of spry bougainvillea branches, I had taken to stretching my neck and drinking them through my nose. Ah, if only scents could fill the tummy!

Dadda did not return with the food last night. Everyone was hungry. Everyone is not as many anymore. Time was when we were many more – as many as my digits could count. Huddled together, we completely filled the space under our canopied nest. And now, as Little-Brother lies crawled under Mama, I get my choice of the side I want to huddle on and the instant I bury myself into Mama’s arms, she starts grooming me and I gaze into her lovely face full of meanings. I see the world.

This morning she was worried. I could read it on her face. Why did Dadda not return?

“Take care of the brood. Don’t step out,” she instructed me as she left for food.

I looked at us. Little-Brother and I – two lonesome brothers – form the brood.

On other days, Mama stayed with us. Through the night, we – of the brood – would play fight. We would jump, chase and tumble. We would go for each other’s necks and emit cries – “Hoi!” “La!” Mama would tell us to hush, and we would laugh even more. Like this, the night would pass, we would slip off to sleep and doze through the day.

Now the brood has shrunk. With almost no play, nor fight, we slept all night. I cannot sleep any more. I huddle tightly with Little-Brother and think of Dadda. Each time he returned, he gave Mama the food, found his quiet corner and watched us play, rough-and-tumble; groomed himself as he watched and slowly settled to sleep. I remember again that he did not return last night, sigh and start missing his low, contented booms. Little-Brother is breathing rapidly. He is sound asleep. I rise and decide that I must see the world.

Magnificent is the blue spread of the world beneath me. Separating two sprigs of the bougainvillea, I am viewing it stealthily for Mama has taught us to remain hushed whenever we can. It’s a dazzling world. Why are we kept from seeing it?

I ogle with delight at the festoons of grapes dangling like dozens of juicy teats. Down below, a black cat is walking her lordly walk. A dog lazes in the glorious sun. Envy – I feel envy.

Flowers sway their heads. I sway my head along! Is there music in the air? I stretch up and hear just cries – plaintive and of laughter.  A man is blowing the leaves noisily on the far side of the garden.

Gazing down from between the sprigs, I am filled with glee and I grind my teeth until they chatter uncontrollably. A woman, holding a little bag, emerges from the door. She calls out and sits on a step. Pebbly things roll out from the bag, fall onto her palm. The dog springs to life as the cat squats to her feet.

“This is for you,” the woman places a pebble on the ground under the dog’s muzzle. Then one under the cat’s mouth, “And this is for you.” One moment I am sitting with my chin resting on my two fists listening to her fabulously modulated voice, next I am completely bowled over by its sweetness. The pebbles vanish right away and the woman has placed another one for the dog. Again she goes, “This is for you.” To the cat, “This is for you.” Many pebbles make the feast last awfully long. My mouth is working feverishly. I fight the urge to join that happy group, stop looking at the pebbles, and concentrate just on the woman’s voice instead.

We learned quickly to grab the dew to quench our thirst. Sweet fragrances swamped the air this morning. Huddled in our nest under a canopy of spry bougainvillea branches, I had taken to stretching my neck and drinking them through my nose.

A squirrel appears on the rooftop, starts a scolding rant and instinctively I hide behind a leaf. The dog groans a low growl and the cat is on the alert. The woman laughs and calms them and from inside a man rushes, another bag in hand, pulls a ladder and fills a bowl already in the gutter with seeds I would have loved to munch.

What is this picture of happiness? Is this glowing place, so airy, at once cool and warm, the mythic land of plenty?

There is a shriek. The cat hears it. So does the dog. The man and the woman keep smiling, frozen in their land of bliss. I have heard the shriek too. But, I am rolling with happiness, mesmerized with the scene below, drinking it with my eyes and groaning, “Oh, Give me more, more, and more!”

Then I see the leaf-blower-with-legs approach the man and woman and my eyes widen with horror. The woman jumps up with a shriek, she runs inside. It is Mama, the gardener is holding, by her tail!

Where were you Dadda? Why were you not here? For if you were here, you would have fluffed up your hair, and hissed at that man and bared your teeth and moved around your long tail, telling him to back off. You would have wrestled with him, and chased him off and saved Mama.

No Sir, Ma’m, people of the world! Life here can be horrible for no reason, for no damn reason.

“Rat-a-tat,” It’s bright now, I’m-a-gonna leave in the thick of the night.

“Rat-a-tat,” Leave, run from this land of the flowers. Flowers, that are a-blooming for just a single day. Rat-a-tat-a-tat!

I’m-a-gonna dive into deep waters – swoosh – until the dark night is gone. Rat-a-tat-a-tat!

I’m-a-gonna hook Little-Brother up too, and all together, I’m-a-gonna inhabit the underworld. Yes I’m-a-gonna live ever after under the ground in my burrow coz’ life up here can sure as hell be horrible for no reason. 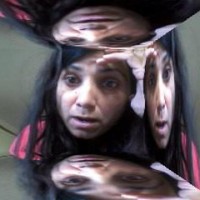 Mukta Singh-Zocchi has a Ph.D. in Physics and has several publications in scientific journals. She now writes fiction full-time, her main genre of interest being Indian historical fiction. She has written The Thugs & A Courtesan and have received a writing award for the short story “Fire of Desire” in 2008 in the US. Another story, “Catharsis”, was chosen a finalist in the Wordsmitten “TenTen” short story contest in 2007 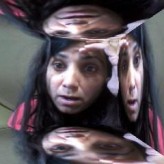