Another Year Gone. Swoosh! Just like that – a Nike logo. Our pockets are empty, our dreams are dead and the Change we had gifted ourselves has become a dread. But was the year that went by, really, truly that bad? Surely, we have learnt so much, achieved such seemingly impossible feats that even the terminally pessimistic Bengali bhadrolok has reasons to cheer?

Take Senior Citizens for example. Our parents don’t grow old and senile any more. We have transformed them into Senior Citizens, replete with a 1 percent accretion to the interest on their FD’s, a discount in air tickets purchased from make my trip and infirmaries where they can be packed off to, far away from our 3 BHK paradise, ironically termed a nest for the wasting. After the Nursing Homes wring their hands in glee and put them into the ventilators, the Doctors don’t shake their heads in grim solemnity no more – they just say that the condition is critical but stable, nonchalantly folding their stethoscopes. In plain speak, it means it is time to track down our insurance agent who will take one to the counter of the finance company next to the reception so that we can mortgage our family jewels to pay for the Cash Less hospitalization expenses that we thought, we had already paid through our nose for the last two decades. And then, to contact the Photoshop artist who will not only remove the warts and blotches but also miraculously transform the picture our parents had had snapped in Kashmir during their honey moon into a coloured one – one in sync with our Klout score and standing in life.

Our children too have ceased to being weird – they are now differentially abled. Desperate to see all our unfulfilled dreams coming to fruition in them, we systematically rob them of their childhood, to the extent that their lives have become an unbearably endless routine. From school to cricket coaching, to tuition’s in handwriting to physics, to piano classes, to Bollywood dancing, to roller skating. Ever so busy multi-tasking and moonshining we can afford only quality time for the kids, which we use tobuy loyalties by helping them gorge on oxymoron’s like vitamin fortified burgers and calorie counter’s cola’s straight out of hermetically sealed plastic packages.

Sick of being a minority slave in office, we flex our pseudo majority muscles at home, inebriation helping the demons come out from within. We sleep with the enemy and hunt with the wolves – tolerating our mattresses at home to seek solace from mistresses elsewhere, walking the high wire of hopelessness, deluding our disillusioned, despicable souls. Then, when the inevitable fall comes and our children look at us “strangely” (read hate-filled eyes) we try to appease them with all the toys that money can buy, damning them further into the black hole of post WWII Japanese cartoons andC-grade Hollywood serials with Hindi voice over’s by failed comedians.

We try to retrieve the day with our flag marches on the home front aimed at area domination, but to no avail – our son, while we were busy bragging about our achievements and prowess’s, was neither practicing to win the Maths Olympiad nor, perfecting is square cut to ensure his place in theRajasthan Royals, but was actually romancing the mother of three across the street when not doing drugs. Yes, that woman of loose morals the entire neighborhood talks about.

Our daughter, yes, the little princess we encouraged to wear French perfume to school is actually contemplating tying the knot with the leader of the local Auto rickshaw union and move on to his one room palace with his parents and unmarried sisters. “Yes”, she will take the 376 Barbie dolls we bought her over the years. “No” she doesn’t give a damn about what our friends and our society will think. The wife, in the meantime, has been reunited with her childhood flame – the same excuse of a man she had rejected to hitch her fate’s wagon on to our carriage (or marriage, or whatever), blinded by the Archie’s cards and politically correct promises. While we were busy ogling at the society ladies applying sanitizer on their hands, through layers of whiskey in the Club, that jobless, hopeless and useless wimp was apparently serenading the wife with his poems that even she didn’t understand for the last thirteen years, but what the heck? Yes, we have a term for your state as well, it’s called co-lateral damage.

Even as the walls keep crashing down, even as the world of deceit, that we had created so painstakingly around us crumble, we will not pay heed. We will talk about corruption in high places,moral bankruptcy of the state and gleefully point fingers at everyone, conveniently forgetting that we, ourselves are the biggest clowns in the piece. And yes, we will also post pictures of the beef steak we had last night while sounding the clarion call for the revival of Hinduism.

What else can we do? Some of the blanks in our neatly labeled, Made in China lives are so damn inconvenient that they just cannot be filled, even by us, busy formulating what India will think tomorrow. We will bend down, discover four balls and think we are Super Bongs, refusing to accept that actually it is Life:  Rogering us Rabbits, Royally! 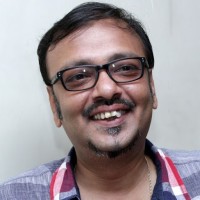 A maverick who has scaled all the peaks – as a columnist, as a hard core tv reporter, as the owner of a pr agency that has nurtured brands as diverse as pepsi and gujarat nre coke among a host of national and multi national clients, as a photographer, as a specialist customizing communication solutions. As a published author, a social media scientist. Thinker, dreamer, artist. The one thread that binds this bundle of talents together is passion. A passion for excellence, a zest for life. 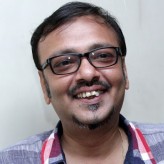 Theme for June 2014
The Lazarus Bond by Debiroopa Banerjee